It all started with Gangham Style, continued with the K-Pop bands craze, and culminated with the Oscar-winning film Parasite. Year by year, the South Korean factory of viral hits was conquering the consumers of digital content. And it finally reached the peak of its popularity in 2021 with the Netflix hit TV series Squid Game. It changed the way we watch TV series and how we approach television marketing and the promotion of television content. 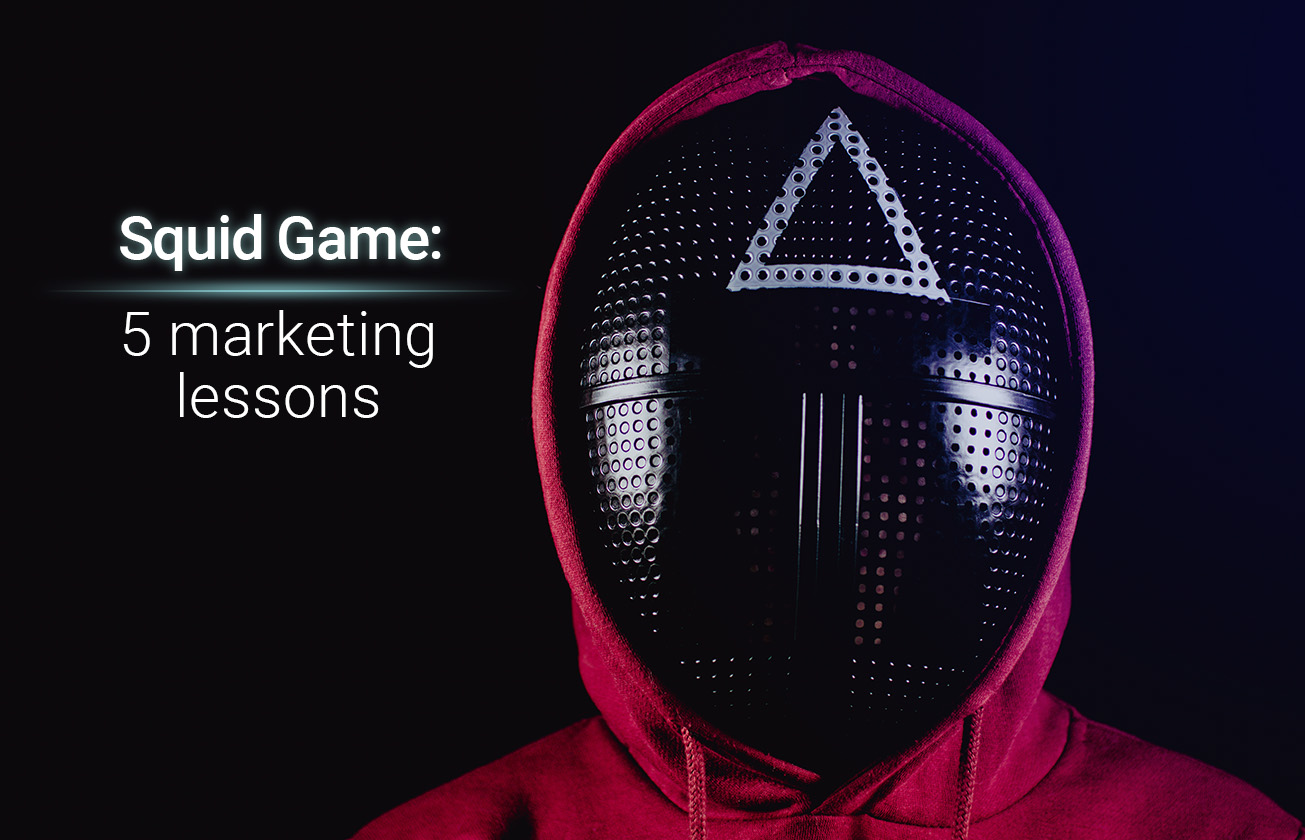 Even though Squid Game owes its success to organic growth, i.e., viral word-of-mouth recommendations of fans on digital channels, it’s worth asking ourselves what powerful digital marketing lessons we could learn from this popular TV series and what it did for television marketing in general.

You’ve already heard the story from your friends, or you have read it online. But, in ten days only when it first appeared on the Netflix streaming platform, Squid Game became the most viewed digital content in 90 countries in the world! It’s hard to remember when a TV series made the world go wild in such a short time.

What’s the secret ingredient of Squid Game’s success? Is it its quality content and engaging storyline, narrative style, and actors, or perhaps its marketing promotion – the way it changes television marketing and the promotion of television content?

For those who are still not acquainted with the plot of the series, let’s have it retold shortly. Four hundred fifty-six ordinary people were invited to participate in a deadly reality show for the cameras and secret VIP audience. Their task was to survive in a deadly game and win a multimillion money prize. The candidates were picked from the well-funded private organization, which chose them for their lower social status. Mainly they were outcasts and losers with financial debt they could not repay. So to put their lives at stake in a game was the only option left to protagonists.

1. Why is word of mouth still the best promotional tool?

You’ll be surprised when you hear that Netflix placed the series on its streaming service without any promotional campaign. They only posted one video trailer, and that’s all that we got from their planned marketing activities. Heads of Netflix didn’t expect a Squidmania to happen to the Korean series with English subtitles. They were aware that the Western audience wasn’t inclined to foreign series with subtitles. Maybe they thought that the Squid Game’s combination of Hunger Games scenario and solve and die type of horror movies (Cube, Saw) didn’t bring anything new to the table. Therefore, it didn’t have the potential for broader popularity.

But then word of mouth happened that spread the viral buzz among the excited Netflix subscribers.

In an instant, and like in a viral epidemic, everyone talked about the new must-see TV series. Fans started to post social media memes with screenshots from the show and funny comments. The most eager were younger fans, namely gamers, who otherwise do not follow this type of content. In addition to that, the TikTok platform was flooded with videos, memes, and inevitable challenges of fans dedicated to the show's protagonists. In short, Netflix got lesson from the organic TikTok marketing from their fans.

As Bill Chan W S  from LinkedIn page states: “Word-of-mouth is more powerful than paid ad campaigns because the growth is organic and the speed of information spread is unbelievably rapid.

Netflix's experts for digital marketing were taken aback with the popularity of the series. But then they quickly handled the situation. They decided to take advantage of the surrounding buzz, and they retweeted the fans’ posts on their Twitter and Facebook accounts.

The most popular and the most liked Twitter, Instagram and Facebook posts were elegantly shared on social media channels to capitalize on their popularity. The fans were creative, witty, and innovative in their memes. They touched upon everything – from bad habits like reckless driving to their addiction to the series: 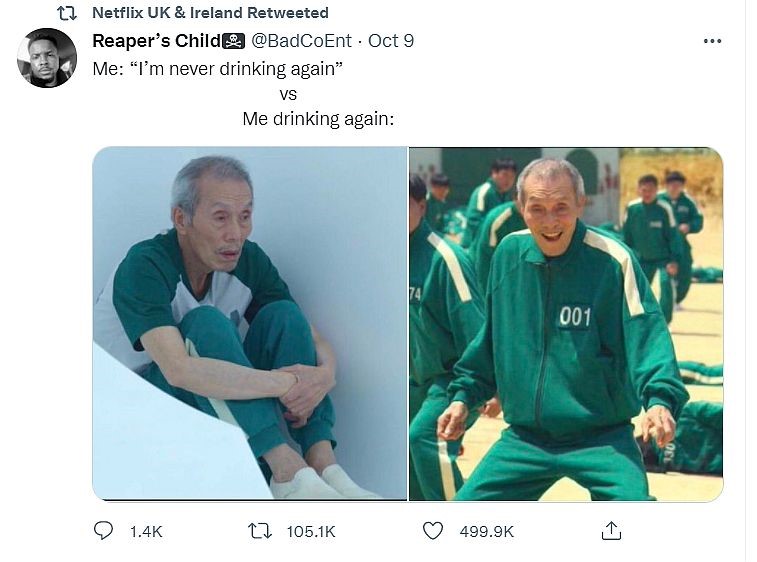 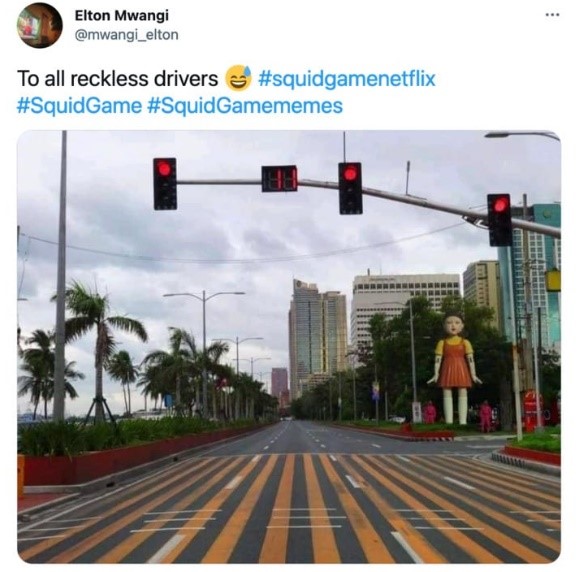 However, the Netlix’s department of digital marketing stayed busy too. They created inventive posts and memes, which additionally contributed to the popularity of the show. Let’s mention brilliant allusions to the Facebook crash that happened during the show’s peak of popularity and the allusions to dramatic events of episode six, which emotionally shook fans – harder than the proverbial Monday blues: 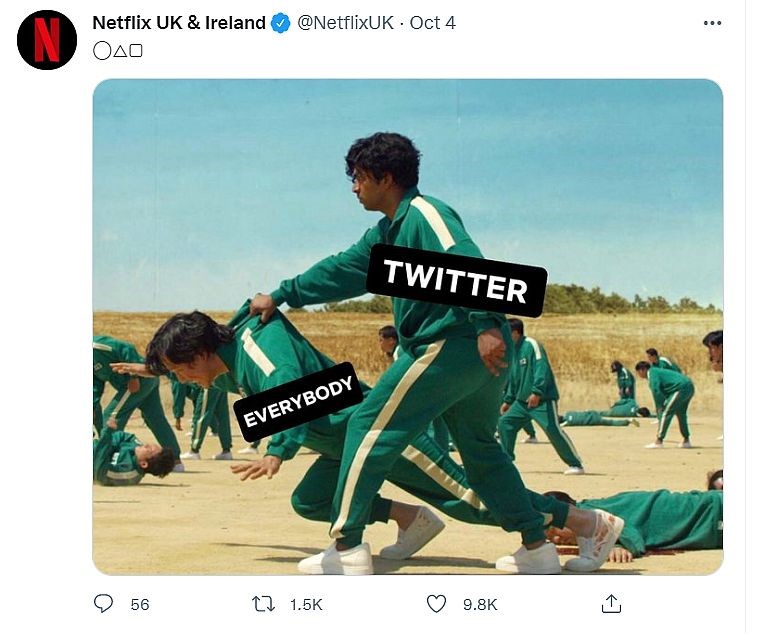 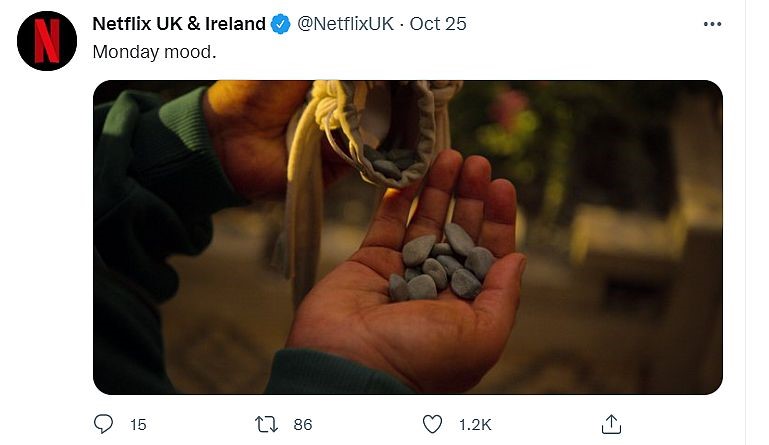 3. Do not underestimate your audience, especially gamers and the TikTok generation

Until recently, media experts were trying hard to develop the marketing approach to the elusive demographic groups like TikTokers and gamers. How to make them interested in any kind of content different from their niche interests, they wondered? In short, they asked themselves how to sell additional content to kids who only follow dance moves of other kids on the TikTok platform or enjoy in shoot ’em ups in popular Fortnite? Is it possible to sell them a TV show that tackles social issues like contemporary capitalism, widespread personal debt, and social solidarity? Is it the impossible mission, maybe?

Even though the geniuses at Epic Games (the company that runs Fortnite) found successful marketing models for the gaming population, the more general content did not stick among TikTokers and kids crazy about video games. Well, not until Squid Game showed up.

Since the first episode, Squid Game offered its fans scenes that looked like they belonged to the most viral dystopic video game. Gamers clicked instantly to video game aesthetics of Squid Game:

The series even had trendy looks that were in line with the taste of the youngest audience - cool-looking retro trainers of the main characters of the show became an instant hit on the Internet, and they became the favorite pieces of street fashion. Even the beautiful white slip-ons in the style of Van’s brand became hot property for fans. In one crazy moment, Vans’ sales skyrocketed to an extraordinary 7.800%! . 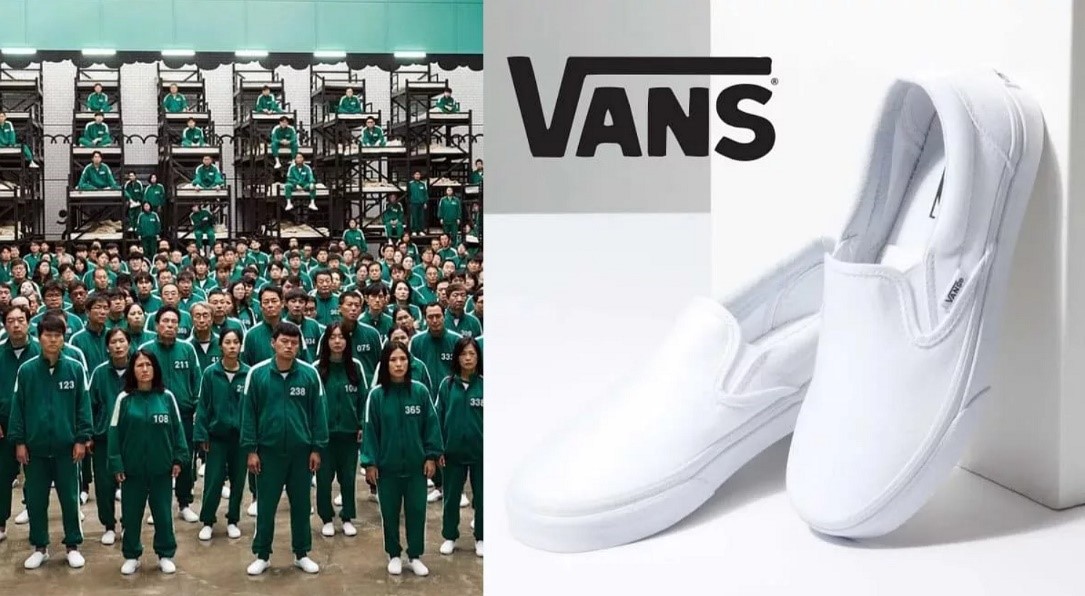 4. No matter how you present your content, make sure it’s got great storytelling

The current fashion trends are one thing, and the story behind the brand or product is entirely different.

No wonder everyone says that we are living in the age of content marketinga. It means that whatever you broadcast into the digital ether, it has to have strong storytelling.

And one of the critical stories that surrounded the creation of Squid Game was the story about the stubborn resistance of TV studio houses to produce the TV series. It took ten years for the authors of Squid Game to persuade the producers. Each time they approached them, they got the same refusal with explanation: this is so grotesque and unrealistic!

So the catchphrase “it took them ten years” became the magical ingredient for the story of the show’s genesis. It was terrific proof of the authors’ dedication and persistence to stick to the idea and realize it no matter how.

As Bill Chan W S comments: “Rejection sparks curiosity in the audience because people want to know why it was rejected rather than acceptance”.

Well, identification of the audience is, after all, a key to successful storytelling. If you, for example, dream about your family's safety on the road, you will buy “the safest car in the world” like Volvo. But, on the other hand, if you are not “really yourself”, you’ll energize and recover with the Snickers bar, and if you want to watch the TV series that shows the complete dedication of its author, you will pick Squid Game. In each case, you identify with the underlined story.

5. Follow the good old McLuhan’s maxim: the medium is the message

What do you think: would Squid Game become such a phenomenon if it was broadcasted on HRT? We doubt it would reach further than Croatia’s closest neighbors.

But since it’s smartly placed on Netflix streaming service with more than 290 million subscribers worldwide, it exponentially increased its chances for success.

The message is the medium, said the famous media theoretician Marshall McLuhan half a century ago, and we think he had the point. In the marketing world, the proper positioning of the product is decisive for its success and sales.

And Netflix is an excellent medium for the distribution of content because:

Let’s get to the conclusion. From viral word of mouth to smartly chosen distribution channel… Squid game has shown the right direction for digital marketing activities in the age of social media and wired channels. It also changed television marketing and the way we approach the promotion of television content.

The old rules no longer apply. And the new ones are written by consumers of digital content. So they are, in the end, authentic influencers and meme creators who dictate future viral trends.