One of the most common questions asked by our clients is: "Do we need TikTok, and how do we advertise on it?" So we thought, why not write a blog post in response to everyone asking the same question! 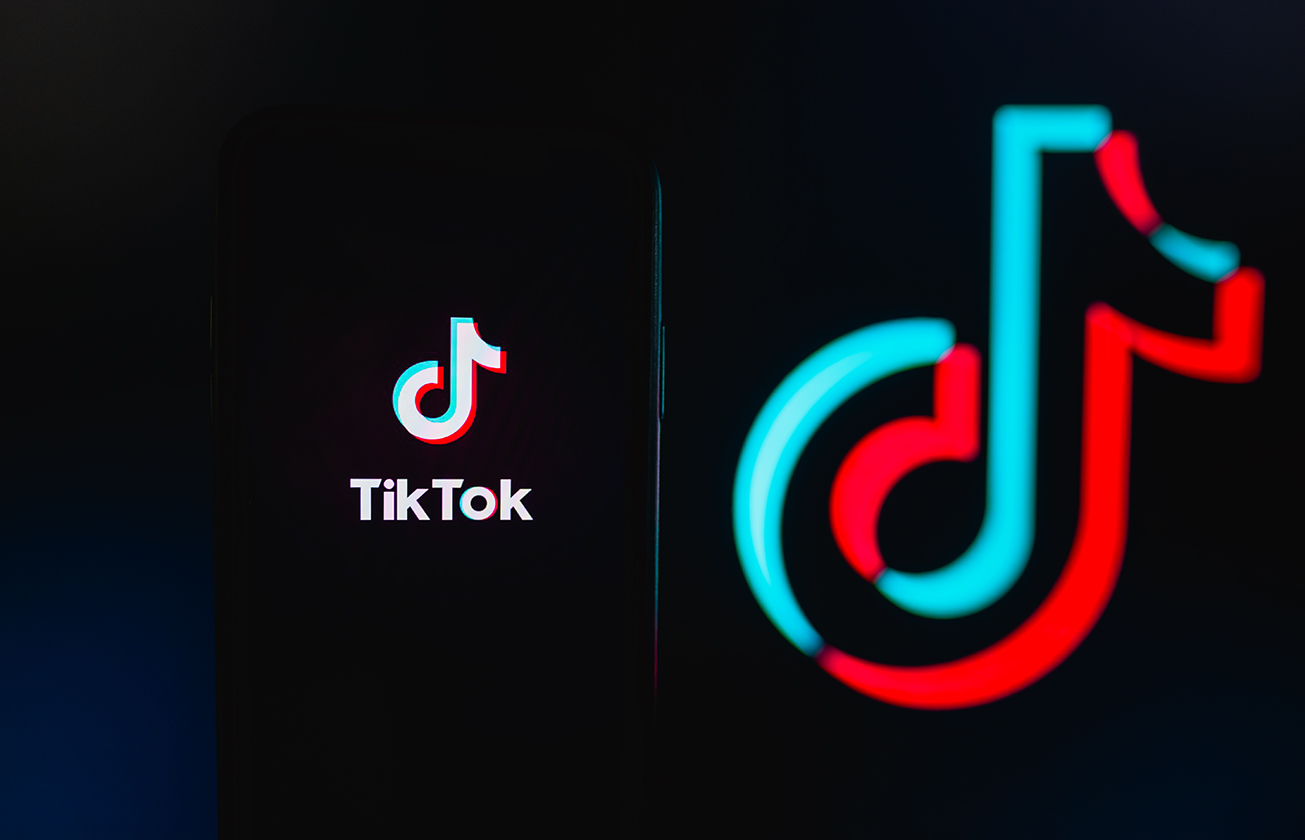 For starters - what is TikTok anyways?

The app started as Douyin and spread rapidly across China, East Asia, India, and Russia. After merging with another Chinese app, Musical.ly, in 2018, there was an even faster expansion via the Android and iOS storefronts.

The application's popularity had also led to a famous scandal when former US President Donald Trump threatened to ban the application in the United States if it's not sold to "one of the reputable American corporations". New US President Joe Biden gave up on the idea without thinking.

It's putting it mildly to say that the emergence of TikTok caused confusion in the social network sphere. The first phase was a misunderstanding, the second phase was rejection, and finally, in the third phase, there was - exploitation.

Marketing professionals, as well as stockbrokers, must have a sixth sense for recognizing opportunities. We already mentioned how some of them recognized the podcast as a profitable way to advertise, and a similar thing happened with TikTok.

The appeal of TikTok is clear. However, TikTok is still under-researched, unsaturated, and represents a particular “new frontier” for all of us marketers.

Brands like Chipotle, GymShark, Crocs, and Boohoo, among others, are taking advantage of the best advertising practices on TikTok, leading to a vast number of views and engagements on their content, an increase in followers, and ultimately - an increase in brand awareness and brand love.

It's not just children on TikTok!

We will not save this plot twist for the end, but we will use it in a Hitchcockian way - in the middle of the article. Yes, there are mostly children and teenagers (41%) on TikTok, but the second most important group of users is younger millennials under thirty. So why is this information relevant? 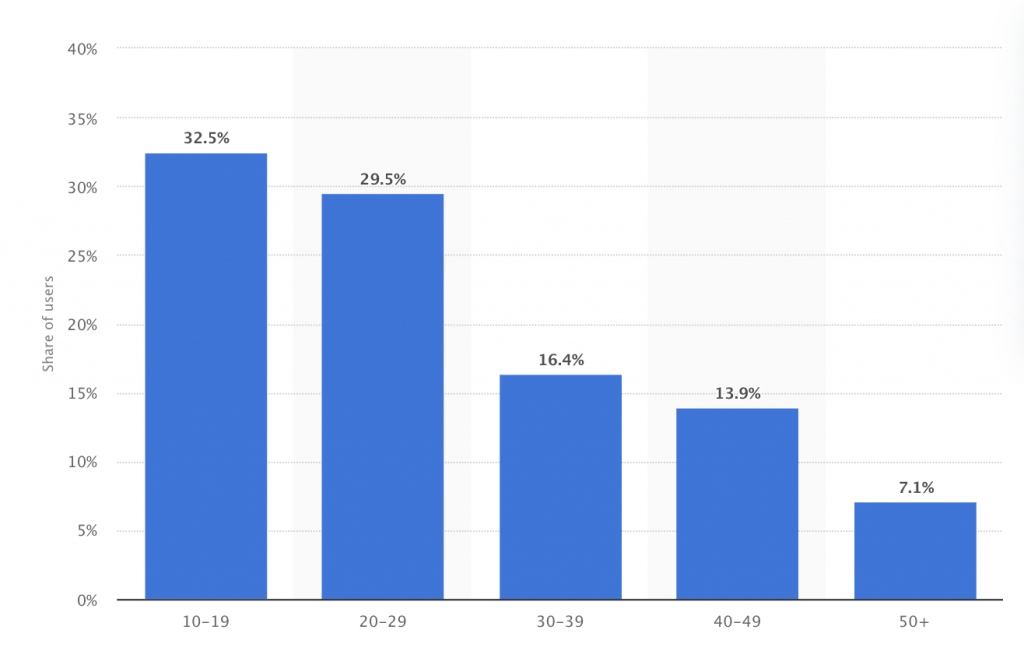 What's the average user's age? It seems pretty clear from these data. (Source)

Knowing your target audience is always essential, especially if you want to advertise on TikTok. For example, let’s say your target group is women between the ages of 45 and 55. Then, spending money on collaborations with influencers, creating original content on TikTok, and other TikTok marketing strategies won’t be effective.

If you continued reading after the last sentence, you target Gen Z and young millennials, or people between 18 and 30. In that case, TikTok can be an incredibly effective tool for spreading your brand, but with a couple of asterisks.

Ok, now you know if you need to advertise on TikTok, let’s explore how to promote on this platform.

So far, there are three and a half ways to promote your brand on TikTok.

The first way is simple, create a channel and start creating original video content. It sounds simple, we know, but like any social network, TikTok has its little quirks that need to be taken into account.

For starters, to warm up your community manager, follow the hashtags that are trending, meme formats that have exploded, and create your content accordingly. Later it will come to you much more quickly and more naturally.

The organic reach on TikTok is enormous, but creating a concrete engagement only happens when the content resonates with the audience and the unwritten rules of the platform. Or, to put it more directly - advertising for the sake of advertising does not work on TikTok.

Another way to promote on TikTok is to collaborate with influencers. Yes, we know, it seems obvious, but bear with us!

TikTok influencers are unique for several reasons. First, most of them are exclusive to TikTok and create all of their content there. Also, they have all the tools in their little finger, and most importantly, they know how to recognize the benefits and trends that would be best for your brand.

In addition to all that, TikTok also created the Creator Marketplace, a specific hub whose purpose is to connect content creators on TikTok with brands. 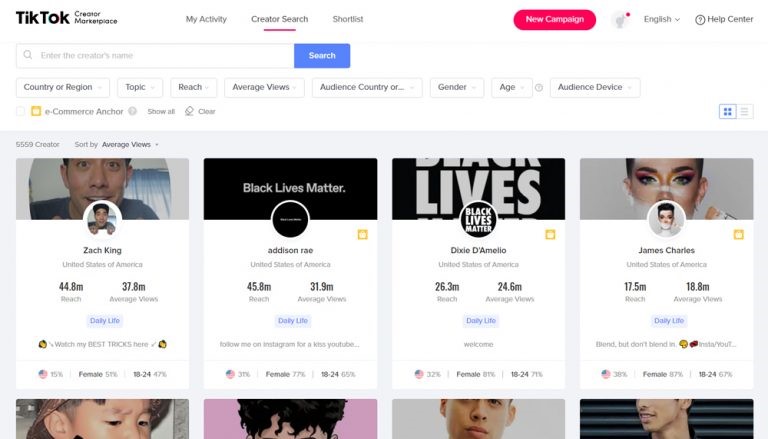 TikTok Creator Marketplace or should we say the vanity fair of influencers?

The third way seems easy enough on paper but is potentially the hardest to succeed.

Creating a challenge can lead to the much-desired virality, positive, of course. But, it's enough just to take a look at E.l.F cosmetics and their #eyelipsface campaign, which attracted more than 4 billion views and 5 million videos. Enough for AdWeek to declare its most successful campaign on TikTok.

Now, you've probably been wondering - "Why three and a half ways?"

The last way is classic digital advertising, similar to other social networks. The keyword is “similar” because TikTok ads are still in the development phase.

There are three advertising options - in-feed ads, like Instagram, a sponsored hashtag challenge, and banner ads that appear when users enter the app. Targeting is currently also limited to age, location, demographics, and people who have viewed similar content to yours.

As for the future of digital advertising, TikTok also seems to incorporate as many business opportunities as possible. So in the middle of last year, they created TikTok for Business, which helps companies advertise as efficiently as possible, with the promise that the expansion of opportunities will come in the coming periods.

See you on TikTok?

TikTok is not just a trend that will pass. It's enough to look at the numbers, as well as the power that TikTok influencers have to see that this is a serious social network and not just a tool where children dance.

We don't know how the future of TikTok marketing will develop. But there is sure to be a more substantial presence of ads, measurement tools, and more vital collaboration with influencers.

Or, as always, contact a digital marketing agency like Logic and leave it all to us - we know what we’re doing!