We all love birthdays, but one happy anniversary has a special value in the world of digital media and marketing. What we are talking about is the 20th birthday of popular emoji who first appeared in 1999 on Japanese mobile phones and in the next two decades became the universal icon of social media communication. This is the story about emoji and the way one charming smile(y) changed the face of online communication and digital marketing forever. We promise that you'll react with a Smiley. 😊 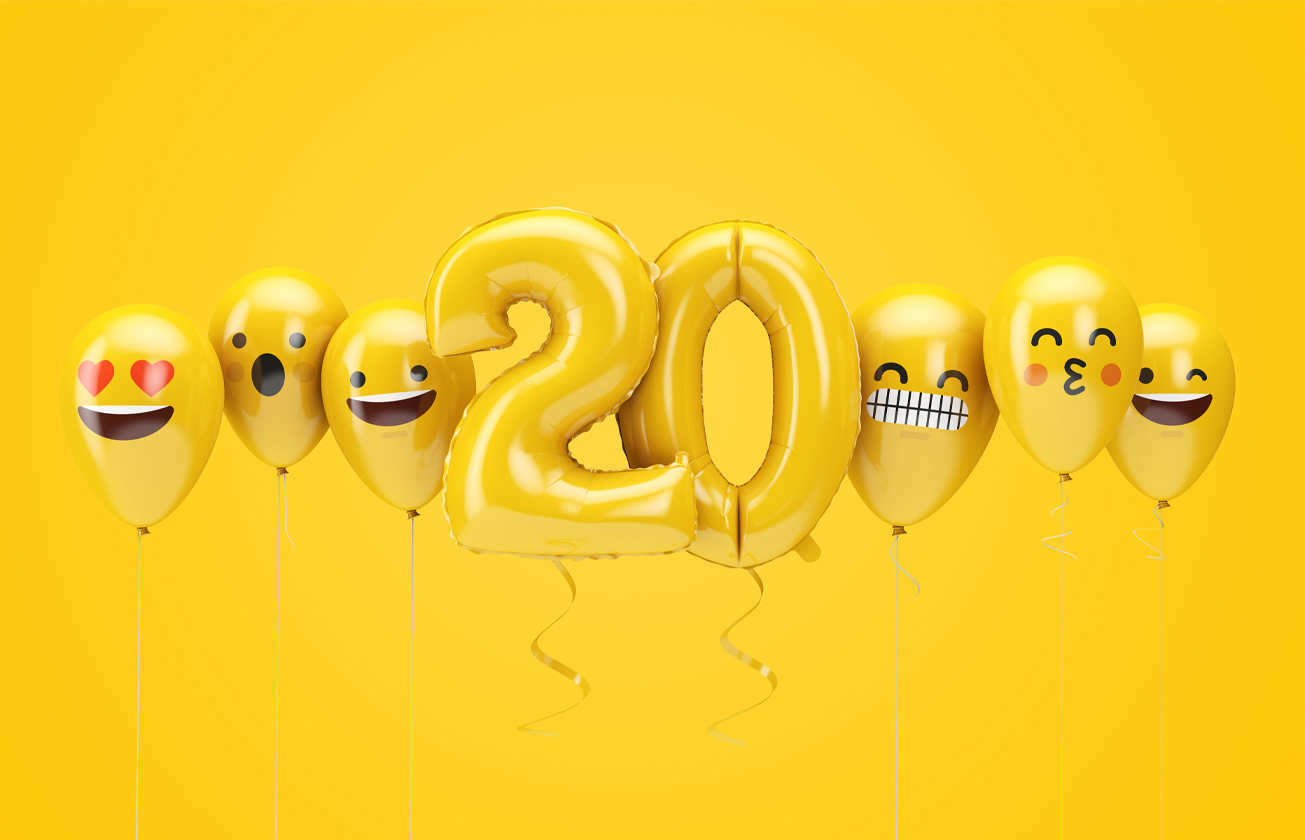 The beginning of popular emojis goes far back into 1982 when American computer expert Scott Fahlman came up with an idea to mark the funny emotional content behind the standard text. He made the combination of : - and ) signs to depict human emotions and he called those signs emoticons.

But to greet the arrival of emojis we had to wait until 1999 when Japanese artist Shigetaka Kurita created 176 symbols for Japanese telecom Docoma. Kurita combined the motives from Japanese manga animated videos, traffic sign symbols and Chinese ideograms and formed jolly visuals in a 12x12 pixel raster. He wanted to offer mobile phone users wide a range of signs in order to help them express their emotions. And thus emojis were born!

Japanese were instantly charmed by emojis who very quickly transferred to various chat services around the globe. But it took some time before emojis became universally readable on all technological platforms. The problem was in that each platform had its own way of coding so you couldn't see some emojis in your Gmail for instance if you had an Apple computer (remember the empty square sign?). It was only in 2010 when universal standard of compatibility was introduced which allowed emojis to be readable on all platforms no matter if it was and Android or iPhone mobile device.

Emotional addition to our communication

Today some 6 billions emojis are typed in every day. And some estimations say that 92% of all people around the globe communicate with emojis every day, every third person even more times a day.

In what does the attractiveness of Smiley lie? Canadian linguist Gretchen McCulloch states that emoji represents a seductive and funny gesture of communication that supplements our words and it does not stand on its own. Expressive power of emoji lies in its ability to be an emotional or ironic addition to our textual communication. It becomes the sign of presence and emotional engagement of our interlocutor who sits behind the other side of the digital screen.

Emojis changed not only the world of comunication but the face of today's marketing as well. It modernized the language of promotional campaigns and enhanced the engagement of fans.

The power of wisecrack: guerilla billboard for Deadpool movie

Many marketing experts think that the guerilla campaign for blockbuster movie Deadpool represents the best application of emoji in commercial or promotional medium.

Teasing billboard with ideographic puzzle appeared on the streets of American cities with the word Deadpoll totally assemlbed from two emojis (dead + poo) and added letter L (dead + poo + L = get it?). The visual puzzle became so viral and was ecstatically shared on social media that the movie itself broke a record of ratings in the first week of its distributon only. The movie scored 132,7 millions of dollars and proved to be the most effective campaign featuring emoji. Deadpool once again demonstrated why he is the king of wisecrack communication.

Storytelling with emojis: How McDonald's deserved its commercial break

McDonald's had its own successful approach to emojis too. This famous chain of fast food restaurants showed how emojis could be used as an excellent storytelling tool. Their „Good times“ campaign featured visuals that told dramatic stories with emojis only (depicting situations like traffic jam, loss of beloved mobile phone) and offering the simple solution – taking a break from stress in favourite McDonald's restaurant.

One visual showed the line of emojis that depicted the traffic jam (car + works on the road traffic sign) with an emotional reaction to it (a cry) after which was placed McDonalds's own emoji and positioning slogan „Good times“ suggesting consumers to take a break and relax at their favourite restaurant.

It's effective, witty and told in a rapid fire rhythm of ideographic communication. The campaign for McDonald's showed that emojis tell stories as equally effective as text, photography or video.

Domino's pizza case: for better service create your own smiley

If McDonald's reached for emojis in order to improve the storytelling for its brand, American pizza delivery chain Domino's used smileys for the improvement of user experience.

They created a chatbot which enabled users to order pizza in a simple way with a specially designed emoji (representing pizza slice).

As a buyer you just had to click on Domino's emoji and order your favourite pizza. As simple as that. The idea was so super cool even if the complete process wasn't so easy-peasy. In fact the customer had to make several additonal steps to make their order viable: they had to open a special Domino's account, chose their favourite pizza and connect their account with Twitter in order to tweet Domino's emoji and thus complete the order.

Even though it wasn't so super practical the idea got into fans for its innovative use of emojis. Even the jury of Cannes liked it so much that they gave Domino's the The Big Creative Idea Award.

Provocative wisecracks, effective storytelling and enhanced user experience... it seems that there's no promotional strategy in which emoji couldn't be integrated.

Let's hope that emoji will have many more wonderful anniversaries and that we will see its appealing face in many campaigns smiling to us its fans and buyers of diverse products.